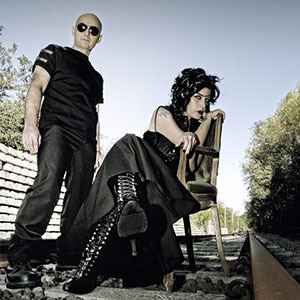 Profile:
Coming from a number of previous music experiences from within the dark and hard rock scene, heavily influenced by the European music landscape, the duo from Rome (Italy) initiated their new artistic season in springtime 2009, writing a bunch of ethereal, down-tempo, mesmerizing tunes. The debut gig is dated July 2009 in Rome and suddenly brought Dhyamara to the attention of club people, with their inspired soundscapes and the unique vocal imprinting by Ninfa. Immediate feedback was amazing and suddenly Dhyamara began resonating as one of the most promising electro dark realities in the Italian landscape.
After a home made first demo CD in the October of 2009 Dhyamara released their debut EP, titled “ GOVANATH” including 4 tracks : The Rainfall, Ariel,Shadows of the Night and the title track Govanath. At the end of the same month of October Dhyamara playing at THE ANGELS OF DARKNESS of Modena ( Italy) one of the most important Italian music festival of female dark/ethereal voices.
In the forecoming months Dhyamara will work at their first full length titled “THE LAST EMBRACE” that will be released in January 21, 2011. After their debut release, Dhyamara will tour their homeland to bring their live performance to a large audience, also including some gigs abroad. The new live set is specifically designed to enhance the dancefloor impact of their tunes and it will surely highlight their potential on both the ethereal and electro sides of their sound.