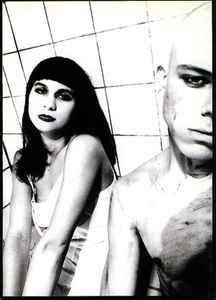 Profile:
Ec8or as a duo was founded by gabba and chiptune artist Patric Catani, and former Lemonbabies member Gina V. D'Orio In 1995. The name Ec8or is an abbreviation of Eradicator and is pronounced Ecator [ɪˈkeɪtə], which Patric previously utilized as his writer name when he used to do graffiti and later on to release music as well. All releases attributed to Ec8or prior to the formation as a band project (incl. "AK-78") are solo works of P. Catani.

Some E-De-Cologne tracks, probably intended to be initially released on Shockwave Recordings, came out under the Ec8or alias eventually, after Patric turned away from the gabba scene in the mid 90's.

The duo released 3 albums and several 12"s and singles from 1995-2000 for Digital Hardcore Recordings (DHR) until leaving the label within "the great DHR implosion" of the millennium. Patric would later express his displeasure about the situation with the label, saying in an interview: "The fact that all the bands surrounding Atari Teenage Riot just got used for their sellout idea – to have a whole “movement” and “followers” – led to psychological warfare which some people didn't survive. There was no trust anymore at some point and no communication, it was necessary for me to leave that behind."

Ec8or is on a permanent hiatus since 2001/02, although the duo played a one-off gig in Dresden in 2005, and collaborated occasionally, as for their one off project A*Class in 2004 for instance. Since then, Patric Catani became more known for his music as Candie Hank, doing music for theater and video games amongst other things, whereas Gina V. D'Orio went on to perform solo and continuing together with Annika Trost as Cobra Killer.
Aliases:
A*Class
Members:
Gina V. D'Orio, Patric Cremer
Variations:
Viewing All | EC8OR
DJ Ec8or, EC 80 R, EC 80R, Ec80r, Ec8tor

March 6, 2022
Alec was always a middle class lifestylist poser shouting platitudes and little else. Without Achim Szepanski of force inc and Mille Plateau as an A-R you could really tell how much he wanted to be a boring old rock star, as if punk isn't just as co-opted as techno and rave. Ec8or is where it is at. And what's more, Patric was and is funny as fuck. Proper proletarian hooligan gear.
Reply Notify me 2 Helpful

October 12, 2011
EC8OR is a mixed bag at best - I like Patric C. but Gina VD's singing annoys the hell out of me. It's an odd compromise between gabber/breakbeat and punk that doesn't always work.

September 16, 2010
Really nice act that sounded like a pissed version of ATR, only more Progressive, more distorted and even more noisily.
I can hardly listen to one of their albums on through, but they kicked ass intransigently and were less populistic than ATR was!
I think the true reason Empire dropped em at DHR was they were selling to less records ... ;)
Reply Notify me 1 Helpful

EC8OR could've easily been "Atari teenage riot's more lowbrow kid sister/brother project" but there was plenty of more ideas. over the years of listening to most of what of Digital Hardcore Recordings had to offer, this band alongside ATR have become a personal favourite, and you can't fault Patric's excellently lo-res programming on most of the tracks. To say both musicians have now moved onto better greener pastures (Catani's work in the puppetmastaz; Gina's "Sailor Songs" album) its often good to go back to EC8OR's older material.