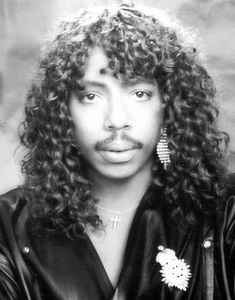 Growing up in the Buffalo ghetto as the third oldest child in a family of eight, by age 14 he already had legal troubles. In 1964 James went AWOL from the Navy because it interfered with his music career, and he fled to Canada for a few years.

His first band, formed in the 1960's with future Steppenwolf member Nick St. Nicholas was initially called the Sailor Boys, but soon changed their name to The Mynah Birds. He also formed the blues band The Main Line, and was singing and writing in The Great White Cane.

In 1977 he formed the Stone City Band. His first album “Come Get It,” reached position #3 on the R&B charts, “You and I,” went gold in September and “Mary Jane," a barely-disguised hymn to marijuana, hit US R&B #3 in October 1977. He also helped launch the Mary Jane Girls in the mid-1980s. Rick James is also credited for establishing the “Punk Funk,” style.