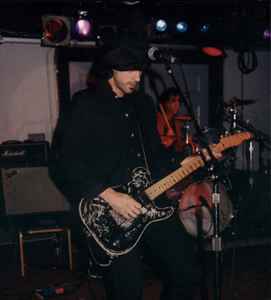 May 11, 2016
Roger Prescott’s first recording band, The Pop, played extensively on the west coast during the new wave/punk scene as well as touring the United States and Europe, and playing festivals in San Francisco, Minneapolis, New York, and Los Angeles. The Pop were signed to Arista Records and made two albums for the label before moving to Rhino Records where they put out a six song E.P. They also filmed segments for The Old Grey Whistle Test, (a Pop music show in England), The Monte Carlo Show, (an internationally televised variety show from Monte Carlo.) and the TV show Hollywood Heartbeat.

After The Pop disbanded in 1981 Roger formed his own band The Exiles (later changed to Trainwreck Ghosts) and recorded an e.p. in Los Angeles and an album in Austin, Texas. Roger also toured, recorded and wrote songs for Chameleon Records group Walking Wounded and popular Los Angeles post-punk band The JuJu Hounds from 1985 to 1990 while in L.A.

During this period he also co-produced, hosted and booked a weekly all acoustic show at The Anti Club in Hollywood, (an otherwise all-punk venue) dubbed The Grand Ole' Anti with shows including now widely known artists like Dwight Yoakum, Timbuk 3, Victoria Williams, Peter Case, and his own group The Holy Boys, who played a combination of traditional Cajun and Appalachian songs as well as alt-country originals and acoustic Balfa Brother’s style versions of such underground favorites as Joy Division’s "Love Will Tear Us Apart" and Author Lee and Love’s , "A House is Not a Motel." complete with Dobro, fiddle and mandolin.

After playing in Austin, Texas at the SXSW Music Festival in 1990, Trainwreck Ghost members Roger Prescott, Robert Williams, and Eddie Munoz (formerly of The Plimsouls) moved the band from Los Angeles to Austin and recorded an album with Aaron White of 6th Street Studios. The recordings that came from these sessions also feature guest performances by Austin luminaries Charlie Sexton and Ponty Bone.

After moving to Austin, Roger concentrated more than ever on his abilities as songwriter, producer, and arranger as well as guitarist; performing, recording, writing and arranging with a new version of Trainwreck Ghost and with Texacala Jones & the T.J. Hookers, who released a CD on the Dallas Texas label Honey Records in 1999.

In the last decade Roger Prescott has focused on songwriting and composition and in 2011 co-produced the debut album of alt-country songstress Renee Wahl, titled “Cumberland Moonshine” (on which he wrote and/or co-wrote 9 of the 12 songs.) He continues to write and record, adding to his catalog of Country, Blues, Rock and Pop songs and composing instrumental music ranging from ambient atmospherics to authentic sounding country-blues and whatever else catches his musical interest on any particular day.