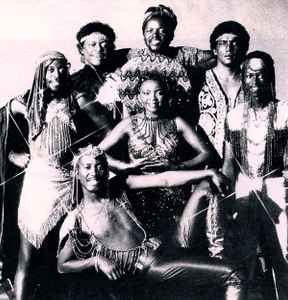 Profile:
Formed in the late sixties and originally known as The Beaters, the South African group consisting of guitarists Selby Ntuli and Saitana (real name: Monty Ndimande), bassist Alec Khaoli and drummer Sipho Mabuse decided to change their name to Harari during a tour through Rhodesia (now Zimbabwe) in 1976. The name is taken from a township outside Salisbury (which is now the capital, Harare).
With their afro-rock/funk/fusion style they achieved huge successes back home and in the neighbouring states, and they were the first local black pop/rock band to appear on South African TV. Their label, Gallo, struck a two-album deal with the US A&M and their 1980 single, "Party", entered the American Disco Hot 100 in 1982. However, by 1984 the group had disbanded, and the members launched successful solo careers.
Aliases:
Black Ink (4), The Beaters
Members:
Alec Khaoli, Barney Rachabane, Charlie Ndlovu, Condry Ziqubu, Eddie Manda (2), Lionel Petersen, Makhaya Mahlangu, Noah Makua, Oupa Segwai, Robert Doc Mthalane, Selby Ntuli, Sello Twala, Sipho Mabuse, Tashif' Kente, Thelma Segonah

I am astonished that not one of the many African reissue labels has yet to compile a collection of the Harari singles and album tracks thought the late seventies and eighties. Hopefully now that their first album has been reissued by the UK Matsuli Music label it will encourage others to follow. For CD buyers like myself there are a couple of compilations but that is about it (and the SA postage costs are so expensive, making a 2nd hand copy four times the selling price!) aside from the odd track like the magnificent 1979 'Give' track that appears on the Strut compilation Next Stop Soweto Vol 4 or other tracks on the Mr Bongo compilations.