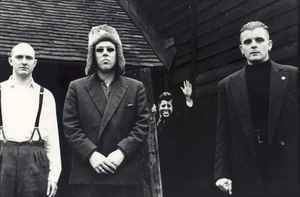 September 9, 2020
If you walked into a room and WP were playing loud, you'd be forgiven if you didn't like it at first. Wolfgang Press is one of the bands which gave 4AD its real charm of supporting expressive, idiosyncratic music when 4AD was at its treasure chest best.

It can't be pigeonholed. It's loud, sometimes brash, with lively percussion, Wolfgang press are the masters of plaintive wailing, seemingly sour notes and dischord, but with the thundering pace, you follow the music and it builds up with immense form and beauty. Some parts are very beautiful, and when you lend your ear for a while you realise the genius behind the music's creation - this music is encompassing both light and dark to extraordinary effect.

For me the best albums are Standing up Straight and Queer. And must-haves are the first three EPs - Scarecrow, Water and Sweatbox (collected on the album Legendary WP and Other Tall Stories). On Sweatbox, is I'm Coming Home and you'll know what I mean by plaintive wailing.

For accessability, Time was a fun track, one of the easier listens and with punny lyrics (a bit like the punning lyrics for My Way), similarly the 'promo' 12" Sucker, which was free with the Queer album. However, unfotunately for Wolfgang Press, accessibility was not their forte and those who were not prepared to be patient and make that initial attempt to listen to WP - well, they miss out on some strong music.

For me, I really did not get the Mama Told Me Not to Come single. It seems that was WP's almot-cracking-into-fame moment, and that was my least favourite of their songs - and the video was ugly: bright colours, ashtrays, a bit like a Lukas Moodysson film. I mention it because of its popularity, but also, oddly, because it seemed to be the least wolfpressy of the lot (of course the mellody is all there, but it is not expressive of much and doesn't have anything unexpected in it).

It's not for everybody (or even many), but there was a very dedicated fan base for this sound. Yes, they are legendary . . .

February 19, 2018
I think 'Lonely is an eyesore' should be added as a compilations that features their unique song.
See 1 reply

May 1, 2016
Extremely underrated band. But they also never made it easy to the marketing team :)
See 1 reply

Definitely a group that defies any categorisation - The Wolfgang Press rose out of the ashes of their previous two noise-incarnations, Rema-Rema and then Mass, mere couple of recordings each; TWP's early works are to some extent connected to these noise-merchant groups but on the verge of the 90s, they confidentially slided from oblique hermetical sound-renditions to impressive dance music with subversive edge - the key record to make such a twist is undoubtedly 'Queer'; using multiple sampling technique (hence Kraftwerk's 'Electric Cafe'), it was still a non-approachable version of 'white funk' (especially if you choose to cover a Tom Jones song the way TWP did). Covering, of course, is not a sole attempt here alone, they already made impressive take on otis Redding's 'Respect' just as effectively. If I can chose my personal favourite out of their constantly excellent discography, then 'Standing Up Straight' is just the one - sentimental and brutal at the same time this album is so rich with emotional impact that it is not recommended to the heart-broken. Its closing number 'I Am the Crime' (also worth a mention for Liz Fraser guesting on vocals), undoubtedly sounds like the truest end of the world everytime I put it on. You take your pick.