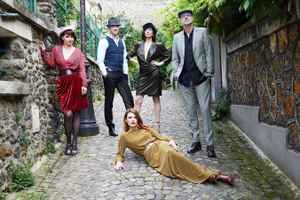 I remember first hearing Nouvelle Vague in the cinema, before sitting down to watch a film. My friend and I were both surprised by the sound of NV’s rehash of Depeche Mode’s Just Can’t Get Enough. It was odd, the female voice rendering the tune a ‘sophisticated’, nonchalant and, well, nouvelle sound. It had us giggling and pleased to remember the old DM song – from when Depeche Mode were firmly in the pop world, not their current industrial sound (which I love).

I then went on to buy that first NV album to discover more. Nouvelle Vague are a strange group. They produce music you’d expect to hear in a supermarket in Stepford – Stepford Muzak. But they do it with already established, monolithic songs. All eighties music. It can be irritating, you can fall asleep listening to it, you can wonder what they are doing knocking down the defining songs of the Indie Eighties. At first I was beguiled and liked it. But then the irritation did creep in. The blandness, removing the essential Eighties sound, the originals were of course better, it was annoying to sustain such an attack on this decade of music when music had proven a kind of hard-won independence with an astounding body of work.

I remember Frazier Chorus doing a mellow, lovely, rendition of Sex Pistols’ Anarchy in the UK – it was funny when you thought of it. That was at the end of the Eighties, 1989 – so Frazier Chorus already had the idea of fronting a soft, mellow sound to an idiosyncratic Indie piece. Nouvelle Vague take that idea and ride it out with a strong number of albums jam-packed with Eighties masterpieces. It makes you realise how creative the Eighties were – it was a totally different sound. [Echo and the Bunnymen, their first four albums, is powerful music and has not been copied. Not to mention the other groups.]

Then they name themselves Nouvelle Vague, which says it all: turning “new wave” into something vague. It’s funny for an instant, but can they redeem their name and turn it into something positive? They are aware of what they are doing, taking these idiosyncratic mavericks, stripping them of their raw power, and concentrating on the song’s melody. Now and then, I do go back and listen to the NV albums, and as I listen – well some of the covers are quite good. A fewer some are great.

Strangely, where you’d think the songs are untouchable, it seems as though my favourite originals are the ones I like most with NV. Using the third album as example, Cure’s All Cats Are Grey works well, and Cocteau Twins Athol Brose is beautifully sung. On the third album there is also the progression (I think) of having some of the original artists duet, these are worthwhile additions. There is a duet with Ian McCulloch, singing his All My Colours – it’s a beautiful gift of music. Ian himself has returned to some of his older songs and given them a ‘softer’ approach, but this duet with NV is one of his best. It doesn’t replace the original, it offers an alternative version. So, as testament, the Nouvelle Vague (tongue in cheek?) experiment works.

Not everybody will like it. But so what? Where I can listen to the Eighties in larges doses, I enjoy NV in small soundbites. A whole evening of Nouvelle Vague would be too Stepford.

October 10, 2019
Much more than a dull tribute band. I had mixed feelings about this project before I went to see them live. Sure, some of the versions add a new facette to old classics and "Dance with me" is one of my all time favourites, but some of the cover versions sound uninspired. When I saw them performing live I instantly fell in love with Nouvelle Vague as they add a very personal note to each song. Brilliant, but you have to be open and embrace the tongue-in-cheek approach to holy grails of postpunk.
Reply Notify me 1 Helpful

May 14, 2019
Nouvelle Vague's arrangements seduce on the surface, enjoyable and witty but just as deceptively so for not being straight-forward "carbon copies" - which doesn't save them from being a tribute band only classier a cliché than hordes of tribute bands out there, building their entire careers exclusively on other people's songs. The bossanova-ish/chill-out/ballad approach audibly insists on their hype of "being cool", especially when juxtaposing occasional harsh language ("Too Drunk To Fuck") against the comfortably carefree sulk of "their" music. The group's debut passed the initial test as a conceptual firstborn but very quickly it became evident of Nouvelle Vague's mass-exploitation of "retro", and every next album of theirs reflects the predictable, regardless of the group's we're-oh-so-obscure choices ("Athol Brose", "I Melt With You", "Sorry For Laughing", "The American")...
Reply Notify me Helpful