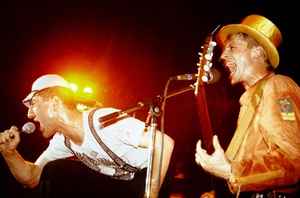 Profile:
French punk band from Paris who became very popular in the 80s. They were formed around the nucleus of François Guillemot, vocals, who will later become a researcher at the French National Center for Scientific Research as a specialist of Vietnam, and Laurent Katracazos, guitar. Using a minimalist set-up, a rythm machine, a guitar, vocals, and later a saxophone, they had committed anti-fascist and anti-racist lyrics and strived for remaining independent at all costs. They disbanded in 1989, but reformed shortly in the 2000s. They sold thousands of records, and their albums are still being repressed regularly.
Sites:
beruriernoir.fr, archivesdelazonemondiale.fr, Wikipedia, genius.com
Members:
Dédé (2), Florence Duquesne, François Guillemot, Jean-Michel Rossignol, La Titi, Laul, Laurent Katracazos, Michboul, Noël Rota, Pascal Kung Fu, Tomas Heuer
Variations:
Viewing All | Bérurier Noir
BN, BXN, Berurier Noir, BxN, Bérurier X Noir, Béruriers, Bérus


I think the group the most sincere and honest about their commitments. They have a passion that has fifty years is more active than ever, humanitarian, "ecolo" in a word TERRIAN.
Thank you for having existed in times of fertilizer and thank you you are always the otherwise blackbird with black berets