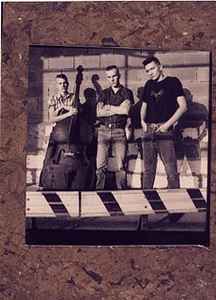 Profile:
French psychobilly trio started in the early '90s under the name of Bobkatz, playing neo-rockabilly. They were two brothers Eleknick (vocals/slap bass) and Frans (drums) and a friend on guitar, Georges. They switched to the name of Elektraws while evolving to psychobilly.
Their first released track was on the french psychobilly compilation Kongpilation (Banana Juice). After appearing at the 1995 Big Rumble in UK, they signed with the famous british psychobilly label Nervous Records (2). Their first and only studio album, "Shock Rock," was recorded in England with sound engineer Alan Wilson and released on CD in 1996. It was released on vinyl in 2007 under license from Nervous, by Klub 333 (Klub 333 is a french independent label who reissue on limited editions psychobilly albums only availlable on CD, it is operated by Frans, former drummer of Elektraws). Elektraws have been touring in Europe until summer 1996 and split up just before recording their second album.
Members:
Eleknick, Georges Defretiere, Hervier Frans
Variations:
Viewing All | Elektraws
The Elektraws