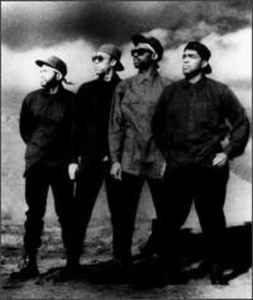 Profile:
The band was born out of the ashes of Code Assualt, the seminal Detroit electro-collective that combined the popular techno sound of their hometown with influences picked up from European bands such as Front 242, A Split Second, Nitzer Ebb and Meat Beat Manifesto.

Code Industry produced an interesting combination out of Industrial/Ebm and Detroit Techno. Formed in 1989 and based out of Detroit Code Industry became the first all black industrial group and the only one that I know ever existed to this day. Their first release went under the group name Code Assault on Alan Oldham's(T-1000) Technika imprint.

This 12" only release featured a remix from none other the Detroit Wizard AKA Jeff Mills. Though this release went largely unnoticed it did make its way to the table of Antler Subway records in Belgium. Antler was interested in signing Code Assault which they pursued by contacting Alan Oldham. Somehow in the midst of the signing Alan got cut out of the deal which due to legalities with Alan and his label Technika led the band to change their name to Code Industry.

Code Industry's first release on Antler is the mini EP "Structure" featuring a smooth as silk combo of dark Detroit Techno mixed and Industrial/Ebm layered with deep dark whispering lyrics. "Structure" is a solid EP of tracks from start to finish and very original to say the least. Within a years time they released the album entitled "Method Of Assembly" on Antler combining once again the powerful seduction of Detroit Techno with hard Industrial/Ebm funkiness.

A little over a year later(1992) they would release their second and last album called "Young Men Coming To Power". This album was only released on CD and was re-licensed back to the American label Caroline via Antler Subway. The album itself took quite a turn from their prior productions incorporating a more commercial sound utilizing guitars and adding major hip hop influences while leaving out the Detroit Techno flavour. Was the world ready for a Public Enemy Industrial group? From what Ive gathered from inside sources this album was a huge flop for Caroline & Antler so perhaps not. Leaving me to question "what if" they would of kept to their techno influenced formula. Would they still be around? Mostly everyone else from this era of Detroit still is.

If you are an avid fan of early Detroit techno I recommend checking out Structure especially for the track Fury. If you like early Underground Resistance you will not be disappointed. For EBM/Industrialists I recommend both "Structure" & "Method Of Assembly" as well.