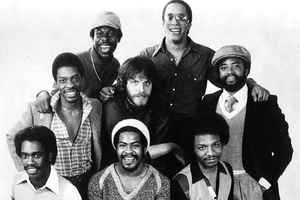 Profile:
Funk / Soul band formed in 1971 in Philadelphia and disbanded in 1980 after leaving Arista. The sound of Breakwater's music is normally that of slow jams, but they have been known to incorporate rock music and funk styles into their songs.
They were signed to the Arista label in 1978 and released two albums: 'Breakwater' in 1978, and 'Splashdown' in 1980. Their second album has been referred to as a funk masterpiece.
Highlights include "No Limit" and "Say You Love Me Girl". The song "Release The Beast" became famous for being sampled by Daft Punk in their hit "Robot Rock" in 2005.
Sites:
soulwalking.co.uk, Wikipedia
Members:
Gene Robinson, Greg Scott, James Gee Jones, John Braddock, Kae Williams Jr., Linc Gilmore, Steve Green, Vince Garnell
Variations:
Viewing All | Breakwater
Break Water

September 20, 2019
TRANZYD: INCREDIBLE HOW THIS GREAT BAND WAS I BACK OF MY MIND AND JUST FORGOT HOW MUCH WE ALL LOVED THEM BACK IN THE DAY. THEY HAD AN INCREDIBLE RUN OF HITS BEFORE FIZZLED OUT. GLAD TO SEE MOST OF THEM IS STILL AROUND AND PERFORMING AND DIDNT SCREW IT ALL UP ON DRUGS!!! JUST SEEMED THE MUSIC AND PEOPLE WERE HAPPIER BACK THEN THAN THESE YOUNG ASSHOLES TODAY. PEACE!!

February 21, 2018
I just want to thank Daft Punk for bringing me here. "Release the Beast" & I want to thank Breakwater for making such amazing tunes. Every time I put one of their albums on I find a different track i love more than the last. 5/5