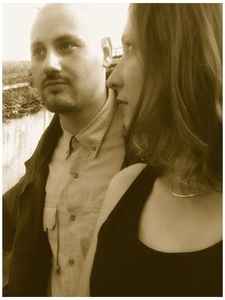 Profile:
Born in 2002 to counter-balance the unhealthy and unearthly nightmares of industrial outfit Neon Rain, Storm Of Capricorn is more than an alter-ego to Serge Usson.
Lavish neoclassical arrangements, bombastic and yet subtle percussions and heavenly chants about the passing times, Storm Of Capricorn stands between a dreamt reality and a dream come true.
Let Europa burn, it will burn again, have a closer look to the men and women who made history, be they anonymous or famous, stare across the seas and drown into the eyes of JFK's america.
50s and 60s pop icons references, ambient soundscapes and an epic stream of consciousness give way to thoughtful and poetic lyrics caressed either by Serge's profound voice or Céline's angelic whispers.
Following their acclaimed participations to famous compilations like "The bells shall sound forever : a tribute to Current 93", "Songs from the bunker" and the four-way split "Hopes die in winter" alongside with H.E.R.R., Der Arbeiter and Ghosts Of Breslau, the duo is about to release their first full-length, "Retours des tranchées" ("Back from the trenches"), on the argentian label Twilight Records.
This album deals with the aftermath of The Great War both from the military and civilian side. No doubt there's new blood brought to the scene here, you'll just have to look into the eye of the storm, for your ears only.
In 2011, Storm Of Capricorn ceased all activities.
Sites:
Bandcamp
Members:
Celine (7), Serge Usson