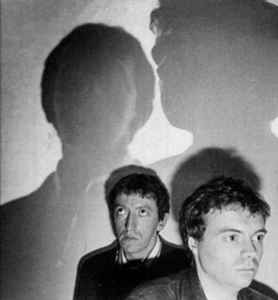 Profile:
Ludo Camberlin [vocals & synths] and Bam (aka Karel Saelemaekers) [synths & visuals] formed A Blaze Colour in Belgium in 1981, disbanding in 1983. Working in a style which was minimal, stripped-down and occasionally experimental, their only releases were a self-released cassette in 1981, a 7" vinyl single, and a 12" vinyl EP in 1982. The cover artwork for the cassette and 7" single were designed by Bam. All three of these releases were titled Against The Dark Trees Beyond, which was originally part of the band's name, inspired by a phrase Camberlin read in a book by the Irish-American author J P Donleavy. It was shortened to A Blaze Colour because fans were apparently having a difficult time remembering the full name A Blaze Colour Against The Dark Trees Beyond.
Three further tracks were released on compilations - the original version of "Fisk" on No Big Business in 1981, "Cold As Ever" on Hours in 1982, and "The Ultimate Fight" on No Big Business 2 in 1983. A remix of "Cold As Ever" was later included on the collection The Dark Side Mixes - Volume 14 in 2011. There also exists a bootleg tape of a live performance recorded in the Netherlands on the 19th of February 1983, featuring six songs - two of which do not appear on any of their other releases. None of the official releases are known to have charted in any country.
Ludo Camberlin has now completely retired from the music business, and no longer has any interest in it, refusing to allow the recordings to be reissued.
Sites:
MySpace, Facebook
Members:
BAM (7), Ludo Camberlin
Variations:
Viewing All | A Blaze Colour
A Blaze Colour Against The Dark Trees Beyond, A.B.C.