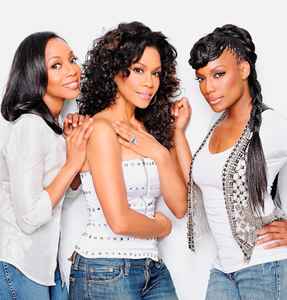 En Vogue were brought together by producers Denzil Foster and Thomas McElroy after they had an open call for a female vocal group. They recorded two successful original albums as a quartette, 'Born To Sing' and 'Funky Divas', as well as a remix album and EP. Dawn Robinson left in 1997 to form Lucy Pearl, leaving that group after their first album for a solo career. The three remaining members of En Vogue recorded two less successful albums as a trio, 'EV3' and 'Masterpiece Theatre'.

Amanda Cole (nee Jones) joined the group in 2001, and Maxine Jones left the group soon after to spend more time with her daughter. Cole then recorded the album 'The Gift Of Christmas' with Ellis and Herron. In 2003, Cole left the group for a solo career and was replaced by Rhona Bennett. Maxine Jones re-joined the group briefly in 2003 to replace new mother Herron for the "Night of the Proms" European tour. After the tour, Herron again replaced Jones and recorded the album 'Soul Flower' with Ellis and Bennett.

In 2005, the original line-up of Terry Ellis, Cindy Herron, Maxine Jones and Dawn Robinson re-formed and performed on Stevie Wonder's latest album as well as on VH1's Hip Hop Honours with Salt 'N' Pepa. They signed a management deal, but were let go when Robinson once again left due to business issues. Bennett rejoined the group and they were rumoured to be recording a new album together. But in 2008, Robinson rejoined the group and they are embarking on a 20 year anniversary tour, as well as working on a new album and a reality television show.

In 2011 and 2012 Maxine and Dawn were in a dispute with Cindy and Terry over who rightfully represents the group and over the choice of management. In December 2011 Dawn left the group and in May 2012 Maxine followed.
Sites:
bay-area-bands.com, Wikipedia, envoguechristmas.com, Bookogs
Members:
Amanda Cole (3), Cindy Herron, Dawn Robinson, Maxine Jones, Rhona Bennett, Terry Ellis (2)
Variations:
Viewing All | En Vogue
En Voggue, En Voque, En Vouge, EnVogue, Envoge, Envogue, In Vogue, Vogue, アン・ヴォーグ

Artists In My Collection by MurderCapital
Female-Fronted by Donut_Duck
Artists I Have Seen Live by 89knowles
To digg by Alistere
Artists I've Seen " Live In Concert"... by Klaus_L
Most beautiful female artists... by KayX
ANV CHEKLIST by Honkelkonkel
Favourite Artists by 89knowles
My Favorite Artists Top 25 by dc3stefan
Girl Groups by WonderBuono
View More Lists →