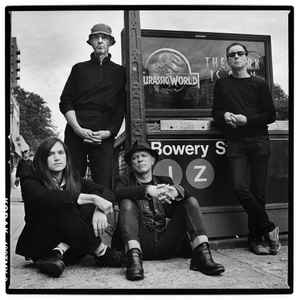 Profile:
Wire is an English rock band, formed in London in October 1976 by Colin Newman (vocals, guitar), Graham Lewis (bass, vocals), Bruce Gilbert (guitar), and Robert Gotobed (drums). They were originally associated with the punk rock scene, appearing on the Live at the Roxy WC2 album—a key early document of the scene—and were later central to the development of post-punk.

Inspired by the burgeoning UK punk scene, Wire are often cited as one of the more important rock groups of the 1970's and 1980's. Critic Stewart Mason wrote, "Over their brilliant first three albums, Wire expanded the sonic boundaries of not just punk, but rock music in general."

March 19, 2016
hi, can anyone say something about a compilation called "Never for money, always for love" (line from "Practice makes perfect")?
See 2 replies

Wire was a real phenomenon in the end 70's. And probably THE BAND of that time.
Their first three LPs, all equally brilliant, absorbed or better reflected, what was happening in Europe these days.
Their sound changed from the fast and short punk tracks of "Pink Flag" and leaded to the longer, more complex sounds of "154" .

Wire was a band of four strong individualists with different music preferences.
And that's probably the reason why their collaboration only lasts three LPs at first.
Newman and Gotobed surely were more Rock orientated, while Gilbert and Lewis were interested in more abstract soundscapes. But no doubt , it was this mixture, which made this band so special and ahead of the time during that period.
But it's impossible to talk about Wire, without mentioning their lyrics. Because no other „Punk / New Wave“ band had lyrics like that. To get an idea, just picture a play by Samuel Beckett mixed with Kafka.
Anyway the band paused after this three LPs . Just a compilation of live tracks was released in 1981 on Rough Trade Records, called "Document And Eyewitness".
Gilbert and Lewis released LPs not only under their names, but also under Dome and Duet Emmo. Followed by „He Said“ (a Lewis project).
Newman had several solo albums on Beggar`s Banquet, 4 AD and Crammed. But in 1986 Wire started working together again, released a few albums, until their „final split“ in 1991.
After that the members came up with solo projects again. Newman also launched the label Swim, together with Malka Spigel.