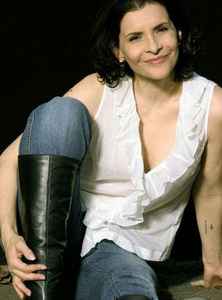 From the age of five to twelve, Marina lived in the United States and learned to read first in English and then in Portuguese. She gained attention in 1977 when popular singer Gal Costa recorded her song "Meu Doce Amor". Other songs she wrote were inspired by her brother's poetry.
Her debut album, Simples Como Fogo (1979) (which, as with all of her 80s albums was released simply under the moniker 'Marina') would influence the coming Brazilian rock scene in the 1980s. She released many albums before achieving major success with the 1984 album Fullgás, which included the hit singles "Fullgás", "Me Chama" (written by Lobão), "Veneno" and "Mesmo que Seja Eu".
In 1986 she released the first home video concert by a Brazilian artist, "Todas Ao Vivo" which chronicled the tour in support of her 1985 album "Todas" and included several of her previous hits as well as backstage interviews. The late 80s saw Marina once again at the top of the radio charts with the song "Uma Noite e Meia", written by and sung in partnership with her bassist, Renato Rocketh, whose own career was launched because of the song.
In the 1990s Marina started showing a more private side of her personality in her songs. The albums Marina Lima (after which she started going by her full name) and O Chamado (released shortly after her father's death), released in 1991 and 1993 respectively, are the most critically praised (and two of the most commercially successful) of her career. O Chamado was released a year later in the United States as "A Tug On The Line", including English versions of some of the songs on the original edition plus some tracks in Portuguese. It's the only album she ever released in the international market.
In 1996, a year after the release of Abrigo (a cover album), Marina became clinically depressed, cancelled her upcoming tour and released two albums (96's Registros a Meia-Voz and 1998's Pierrot do Brasil) which, despite musically crafty and praised for having some of Marina's best lyrics, went by scarcely noticed and surprised for showing a waning, less than confidence voice, which shocked some of her fans.[citation needed] The singer, who at the time refused to admit to her condition, blamed her vocal problems on a physical condition which impaired the range of her vocal chords.
Later on, in 1997, she guest appeared at Titãs' successful live album Acústico MTV, singing the song "Cabeça Dinossauro".
Marina finally returned to prominence with the release of 2003's Acústico MTV (the Brazilian equivalent of the MTV Unplugged series), which spawned two top 10 hit singles (the new track "Sugar" and a reworked version of her 1984 hit "Fullgas") and became her best selling album in over a decade. The DVD (the first of her career) was also one of the year's best sellers. Her most recent album is 2006's Lá Nos Primórdios. Marina is currently working on the editing of the show's DVD, to be released in early 2009.
Sites:
marinalima.com.br, Wikipedia, Twitter, Facebook, YouTube, instagram.com, open.spotify.com
Variations:
Viewing All | Marina Lima
Lima, Marina, Marina And Musicians, Marina Correia, Marina Lima E Banda