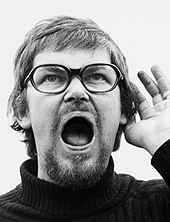 In 1975, Dieter Kaufmann and his wife, the actress Gunda König, founded the "K&K Experimentalstudio" whose main purpose is the production and the play of musical theatre. He received commissions from several festivals : Warsaw, Donaueschingen, Graz, Vienna, Bourges and Crest and in 1988, he awarded in Bourges, France a prize for Journey in paradise, another the prize Ernst Krenek with the opera of the same name in 1990. In 1997, the austrian Republic awarded him for his whole work.

In 2001, Dieter Kaufmann is nominated president of the association of Austria composers's union, president of the association of mechanical copyrights for author as well as dean of studies for composers, conductors and engineers of sound at the University of Music and Dramatic Art in Vienna.
Sites:
kaufmannkoenig.com, Wikipedia, bach-cantatas.com
In Groups:
K&K Musiktheater
Variations:
Viewing All | Dieter Kaufmann
Kaufmann