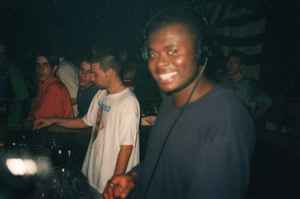 Real Name:
Spencer Kincy
Profile:
As one of Chicago’s most mysterious and revered characters, the story of Gemini, aka Spencer Kincy (born June 6, 1969) has become something of a myth in recent years – blazing a trail throughout the 90’s, prolifically releasing over 200 tracks from 1994 to 1999, Spencer’s music had shades innovation and soul few of his peers could match. Then, suddenly, at the peak of his career, he disappeared.
Rumours and gossip of Spencer’s whereabouts and situation have been rife in the music press, and rarely on the money. Spencer is alive and well, and wants his music to be heard.
Sites:
Bandcamp, Facebook
Aliases:
Gemini Eyes, Gemini Sounds, Pop Rocks, Spencer Kincy
Variations:
Viewing All | Gemini
DJ Gemini

April 25, 2022
the spirit of the yardbird lived on in spencer kincy
Reply Notify me Helpful

October 22, 2020
Pretty hard to put into words how great a musician Gemini/Spencer Kincy really is. On par with Dana Kelley as my personal favourite US producer ever.

He sets the blueprint for the kind of House music I really enjoy now. Tracks like Counting Sheep (the whole Hibernation EP is a big personal favourite tbh), Day Dreaming, The Sound, Oh Get Down, At That Cafe, plus so many more are just timeless. If you're looking for the trackier and more classic "Chicago style" stuff he does that while if you're into more hypnotic cuts that will move both you and a dance floor you're also in the right place.

As another reviewer has written, he is also a fantastic DJ as well and I'd definitely recommend looking up his mixes online if you are looking for some high energy House mixes to listen to (In an interview, Ben UFO sited one particular Gemini mix as a big influence on his style as a DJ).

I do hope he comes back one day as he is a talent and an inspiration.
Reply Notify me 2 Helpful

Great producer, You never knew what you got buying a Gemini 12". He took chances with his music, quite innovative sounds and next-level drum-programming. By the early standards, his music can sound a little weird or off-base, but today, it makes more sense in strong contrast to modern productions. Now you could see that Spencer took some u-turns with his productions. It was completely different from most music out there. And it is great to see his stuff gets recognitions.
But i am going to talk about the Deejay Spencer Kincy. See, i discovered his sets way late. I thought i heard all the DJ greats but once i started listening to his sets.. fookin´ell.
From the sets i heard online, he was totally on fire in the mid 90´s to his sudden disappearance in the early 2000. I hold him in high regards as other legend DJ´s like Ron Hardy, Terrence Parker, Derrick May and Theo Parrish. In fact i could almost put him at the forefront of these guys.. Just way ahead of blending different genres together. His style of mixing are inspired some of Collier´s school of playing records. Fast cutting and high paced house, and such a master putting tracks together. Even commercial tracks. If you did not like a commercial track to begin with, Spencer could mix that record and program you to like it flat out.
People dont play house like that anymore.. take chances, puts the fun into it.. Most deejays these days just safeguard themselves too much.

To me, Spencer Kincy was a deejay's of deejays, and one of those jocks that put some fucking work in it for their money. Today, listening to his old sets makes everything else shit! All those Festival DJ´s putting together bland techno mixes. Nah man, forget it. Spencer was the Zen of the turntables. There are plenty mixes left around to testify to his brilliant craft. Go out, seek, listen to Spencer and understand what spinning records is about..
Sad what happened to him tho´ .. Hope he really can come back to reality at least. He deserves all praise for his legendary contrinution to music, both in the studio and in the clubs.

February 16, 2014
Absolute genius, almost every record he put out is guaranteed quality.
Disappeared in early 00's.. Nobody really knows where he is.

There will be reissues of some of his records in the not so distant future...

And if I may believe my source there are people who are still in contact with Mr. Spencer himself and he will get paid for all the future reissues! ;-)
Reply Notify me 4 Helpful

Spencer's music embodies the most fundamental aspects of dance music which most other producers overlook completely. FUNK, SOUL and JAZZ is represented in true form along with a totally cosmic sensibility. You can tell his intention was for bringing on dance, excitement, fun and completely joyful experiences. This is what house and techno is supposed to communicate. END OF STORY!

November 29, 2012
One of the best. And I´ve been in this "game" for almost 20 years. Still when hearing his sets from the mid/late 90s, no one else reaches quite that high - being it Craig, Mills, Hood, Sven, Sneak, Carter. He´s just one (or two) steps beyond their reach.
Reply  See 1 reply Notify me 3 Helpful