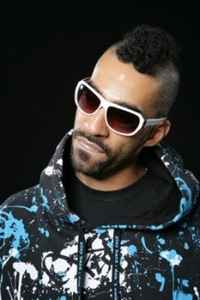 Real Name:
Oliver Harris
Profile:
Harris (born 1976 as Oliver Harris) is a german rapper from Berlin, Kreuzberg. In the 90's he was successful as the Spezializtz, a duo consisting of himself and Dean Dawson. Together they formed the label G.B.Z. Imperium. He performs alongside Sido as well, as Deine Lieblingsrapper (Your favorite rappers), their album Dein Lieblings Album came out in 2005.

Harris is known as a "Party-Rapper", hence G.B.Z. stands for "Gras, Beck’s und Zärtlichkeit" (Grass, Beck's and Tenderness), he also DJ's around Berlin as DJ Binichnich, and is a host on Aggro.TV.

In 2001, he made a guest appearance on the german television series "Tatort", in the episode "Fette Krieger". He is married to singer/songstress Bintia, and they have two children together.
Sites:
MySpace, Facebook
Aliases:
Harry (38), Oliver Harris (2), P.I.M.P. Gyver
Variations:
Viewing All | Harris (2)
Dirty Harris, Dirty Harry, Harris