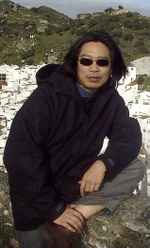 Profile:
Professional photographer since 1979 working in the music industry. His work is a combination of editorial portraiture, live concert photography, location and studio sessions.

By 1987, he worked as the official photographer with many major pop and rock bands of the early to mid-80s era including Culture Club, Thompson Twins, Guns n' Roses, Bon Jovi, Motorhead, Terence Trent D'Arby, among others with his own studio in Chelsea London. By 1990, he was headhunted by the Rolling Stones to be their official tour photographer on the Urban Jungle/Steel Wheels tour of Europe and toured the world several times over with the biggest bands of the early 90s including Guns n' Roses, Iron Maiden, Aerosmith, Ozzy Osbourne, Whitney Houston, and others.
Sites:
georgechin.com