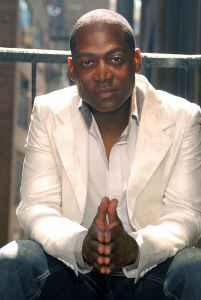 Real Name:
Trey Lorenz
Profile:
Born in Florence, (South Carolina, USA) on January 19th, 1969. He learned to read music while singing in the church. His first band was the coverband Players, who played different Top 40 songs. Later, he had a band called Squeak & the Deep. Then, in February 1990, he met Mariah Carey. He did the backing vocals for the debut album of Mariah Carey and has been touring with her since her first promotional tour in 1990. Trey co-wrote songs with Mariah and they became good friends. Later, he released some solo work which wasn't a commercial success.
Sites:
treylorenzmusic.tripod.com
Variations:
Viewing All | Trey Lorenz
Lorenz, Prey Lorenz, Rey Lorenz, T. Lorenz, T.Lorenz