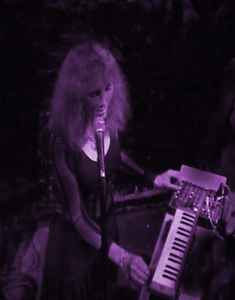 Real Name:
Margarita Saavedra
Profile:
Alquimia is a Mexican female multi-instrumentalist and vocalist with a background in electronic and classical music. Her vocal style combines elements of avantgarde, ethnic, medieval, classical and improvised music. Her scores border on ambient, world and psychedelic music.
Creator of enigmatic, sonic vistas, explorer of the ancient legends of the Aztecs and Mayans, weaver of multi-faceted choral soundscapes... Alquimia (pronounced: al-key-meea) is all of these and more.
Singing in languages such as Spanish, English, French and her native idiom Nahuatl, she uses her voice to create multilayered choirs and electronically altered vocal soundscapes, fusing Pre-Hispanic world music with futuristic electronics.
While her basic tracks feature vocals and piano, Alquima enhances her recordings with layers of looped vocals, electronic processors, sound effects, samples, synthesizers, gongs and bells. The result is a sound that combines the musical traditions of Latin America with influences of rock, pop, avant-garde, classical and improvisational music. Described as "an ethereal chorale of great beauty" …. "Alquima aims to dazzle, entrance , relax and excite, and, does so on all counts," by Audion (UK.), "….her ethereal vocal technique and her sensuous sonic palette are, at once, exotically seductive and disarmingly eerie." (London Musician´s Collective, UK.)
Alquimia was born in Mexico and developed an early love of music and singing, partly from her mother, a classical opera singer. She went on to study in France and Canada, before making her permanent home in England. However, although she has often been far from home, her interest in the ethnic musical styles of her home country, made her learn various pre-Columbian percussion instruments and flutes, while her search for new sounds inspired her use of modern music technology. She has developed some revolutionary singing techniques (some of them involving electronic processors), opening up for her a whole range of electronic and natural new sounds to experiment and compose with.
Alquimia has recorded many albums, both as a solo artist and with writers and musicians such as H.J Roedelius, R. Gleisberg, Peter Mergener, Zinkl, Mark Powell, Art of Infinity, and others.
Sites:
YouTube, bandmix.co.uk
Aliases:
Maggie-Beth Sand
In Groups:
Global Trotters, Karnataka, Mesmerise, Whimwise
Variations:
Viewing All | Alquimia
Alquima, Aquimia

February 25, 2014
Alquimia is a rare talent, a female multi-instrumentalist, a daring adventurer in the realms between the avant-garde, experimental rock and indigenous Central American folk musics. She hails from Mexico, a country we already know for its rich and diverse modern music culture (see Audion #8, pages 12-14), and amazingly her music is often comparable to many a new-music fans favourite Mexican musician: Jorge Reyes.
Alquimia's background is in electronic music, jazz improvisation, classical and contemporary musics, and notably composition study as McGill University in Canada. She rejects the contemporary or jazz fields as one's she now likes to work in, preferring to explore the nether regions of new-music, developing her own sound and above all, escaping all musical categories, combining disparate musics, fracturing the conventional ones and putting them into a new perspective - all this done with an astute sense of melodic structure and accessibility. Okay, as such, Alquimia may not be totally original, I already quoted Jorge Reyes, and could also mention Dead Can Dance, Art Zoyd, N.R. Hills, Luciano Dari, Christina Kubisch, Mia Zabelka, Ordo Equitum Solis, and I could also stretch to quoting Nurse With Wound! Alquimia blends the familiar with the abstract, the melodic with the surreal, the ancient with the modern.
From my review in Audion #22, published in July 1992