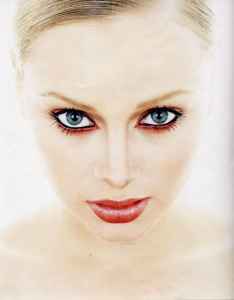 November 14, 2021
She's NOT DEAD ----- PUBLISHED: 18:16, 13 May 2016 | UPDATED: 22:22, 13 May 2016
Model who had a 2004 club hit set fire to her mother's home while hooked on heroin because she refused to hand over money to feed her habit. Delline Bass, 38, topped the dance charts with the band Reflekt in 2004
The former singer and model torched her mother's South Shields home
Mother-of-two developed heroin addiction while pursuing career in London
A model and singer whose life has been blighted by a heroin addiction has been spared jailed over an arson attack at her mother's home. Delline Bass, 38, who topped the dance charts in the mid 2000s, caused a blaze in the bedroom of the house where she was living after the breakdown of her marriage.The mother-of-two, who had already trashed her mother's kitchen that evening after her request for cash was refused, was seen staring into the flames while sitting on her bed. By the time her 64-year-old mother realised there was a fire in her home in South Shields on January 21, Bass - a former singer with the band Reflekt - had already contacted the emergency services herself. Newcastle Crown Court heard Bass's mother had refused a text request for money from her daughter earlier that evening.Prosecutor Neil Pallister told the court: 'The defendant returned home about ten pm, clearly unhappy she didn't receive any money straight away and this caused the defendant to go into the kitchen where, in the words of her mother, she trashed the kitchen. 'The defendant then went upstairs to her bedroom and a short time later her mother recalls being in bed when she could smell smoke. 'She opened her bedroom door and could see smoke in the corridor, coming out of her daughter's bedroom.' The court heard when the fire service arrived the flames were stamped out and Bass's mother, and her partner who was recovering from an operation, were unhurt. Bass launched her successful career after moving down to London, and her band was best known for the 2004 club hit, 'Need to Feel Loved', which reached number 1 on the British Dance Chart. During a 999 call Bass told the operator she had started the fire and taken sleeping tablets in an attempt to kill herself. When the fire service arrived Bass told them: 'I didn't want to hurt anyone else. I would never hurt anyone else in a million years.' She told investigators she had been in a 'very dark place' and had 'wanted to die' when she sparked the blaze. Bass explained she owed money to drug dealers as a result of her heroin addiction.Her mother said in a victim impact statement: 'I think she was just so messed up she wanted to end her life. This makes me so sad.'I don't want her to go to prison, I want her to get help, she needs help and support.'Bass, of Oxford Avenue, South Shields, admitted arson being reckless to whether life would be endangered.Judge Edward Bindloss said this was a 'very sad case' and warned the consequences of fire can be 'unpredictable and devastating'.He told Bass: 'The damage was modest.'There can be devastating consequences when fire gets out of control. Buildings can be damaged, people can die. The risk is high.' Judge Bindloss said he accepted Bass was at a low ebb, struggling to adjust to 'normal life' and had a history of mental health problems. The judge said Bass had sought counselling and medication through professional addiction services.He sentenced her to 12 months, suspended for two years. Graeme Cook, defending, said Bass was willing to accept help from professionals and had never been in trouble before.The court heard Bass moved to London when she was 16 and launched a successful career in modelling and singing. She married and had two children but her marriage broke down last May and she moved back to the north east. The court heard it was while she was living in London that she developed a heroin addiction.