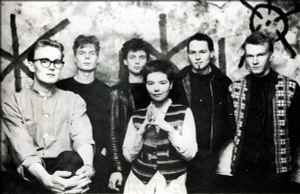 Profile:
Icelandic group formed in Reykjavík in August 1983 consisting of:

Originally the group was a project based on an idea by among others Asmundur Jonsson from Gramm in Reykjavik. They debuted live in Icelandic radio and played at a We Demand a Future festival in Reykjavik 9/20/83 before Crass. Later they played with Psychic TV and in England with Flux Of Pink Indians and others. Their debut album was recorded in London in January '84. Later the same year they played at concerts in several European countries. In June '85 at the Danish Roskilde Festival and later the same year at concerts in Iceland they played with Megas, the "grand old man" of Icelandic rock. Kukl's music is complex and rhythmic, and a mixture of punk, rock, jazz, and more experimental music, with the lyrics sometimes in English, and sometimes in Icelandic. A powerful and personal band combining qualities from three important groups in Icelandic rock from the beginning of the eighties.