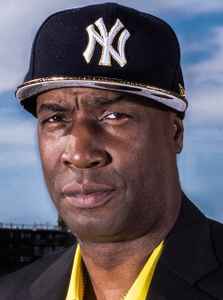 Real Name:
Joseph Saddler
Profile:
DJ / producer of Barbadian origin most famous for his role in DJ & hiphop history, and for fronting Grandmaster Flash & The Furious Five who became the first hip hop act to be inducted into the Rock and Roll Hall Of Fame, in 2007. Born on January 1, 1958, in Barbados, West Indies, he moved with his family to New York City in the early 1960s. Flash was influenced by the block parties and their DJs in his Bronx neighborhood. He took DJ Kool Herc's "merry go round" technique (which consisted of taking the break off of a record and looping it) and then added Grand Wizard Theodore's scratch technique and merged both styles into each other. This was later referred to as 'cutting the break'. Flash took his new style to the block parties in the mid 70s and after early failures he added several MCs to hype the crowd. These early rappers included Melle Mel, Cowboy, Scorpio (Mr. Ness), Rahiem and Melle Mel's brother Kid Creole - eventually settling on the name Grandmaster Flash & The Furious Five. Acknowledged as a defining moment in hip hop history this combination has paved the way for whole generations of hip hop heads, MCs, rappers and DJs worldwide ever since. After the breakup of Grandmaster Flash & The Furious Five, Flash recorded a trio of albums for the Elektra label before reuniting with The Furious Five for the 1988 album 'On The Strength'.

November 26, 2003
He is, indeed, the Grandmaster! He is also, indeed, the father of what you and me call hip hop! And he is, definitely, one of the people whose the expression "DJ" serves as a glove! "The Innovator", says the title of his compilation. And this is one person whose tag serves right and proudly! Respect where respect is due!