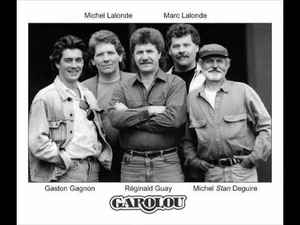 Profile:
Garolou is a French Canadian folk-rock group created in 1975. It was originally called Lougarou, but had to change its name after being sued by a dance troup named Les Loups-garous. The group became popular not only in Quebec but across Canada, with its rock sound and its lyrics taken from French and French Canadian traditional songs.

In 1993 the band made a return supported by many concerts each year. The band performed at many music festivals such as the Festival International d'été de Québec and the Festival franco ontarien. The band released in 1997 a live album called Réunion that captured Garolou's live experience and, two years later, a brand new album called Mémoire Vive.