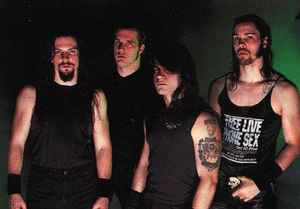 Profile:
Danzig is an American heavy metal band from Lodi, New Jersey, formed in 1987, morphing out of the goth/punk/metal band Samhain. The band was conceived after vocalist Glenn Danzig was introduced to producer Rick Rubin following a Samhain show. Rubin was interested in working with Glenn but not Samhain so the duo set about forming a new group. Glenn insisted upon retaining the services of Samhain bassist Eerie Von. Guitarist John Christ, who had briefly served as Samhain's final guitarist, was also brought on board and, at Danzig's request, Rubin secured the services of veteran punk rock drummer Chuck Biscuits.

The first three Danzig albums displayed a heavy, blues-influenced heavy metal sound and were well-received by fans and critics. In 1993, the band scored a major hit with the release of the single for the song "Mother", which initially appeared their 1988 debut. The band's fourth release, 1994's "4p", showed the band moving away from their bluesier roots and adding more electronic elements. Biscuits left the band prior to its release and Von and Christ departed after the tour for the album. Danzig later claimed that it had been his intent from the beginning to work with different musicians in a style similar to Ozzy Osbourne, although some of the other original members have contended that Danzig was started as a band and not a solo vehicle for Glenn. Now also at odds with Rubin and his label, Danzig departed for Hollywood Records. With a new band and a new label, Danzig released "Danzig 5: Blackaciddevil" in 1996. The album featured a heavy industrial sound that was not received well by fans or critics. The situation was further complicated as Hollywood's parent company, Disney, was uncomfortable with their association with Danzig and pulled all support for the release. The label and band severed ties shortly afterwards.

Danzig continued with a revolving door of backing players joining Glenn. After the release of "Danzig 6:66 Satan's Child" in 1999, the band abandoned the industrial influences and began to return to a more hard rock/heavy metal sound, although they have not recaptured the same commercial and critical acclaim that the early Danzig records have had. In recent years, Glenn has voiced his dissatisfaction with long tours and has mentioned the possibility of retiring the Danzig band if he cannot pursue music the way he wants to.

In 1996, Glenn Danzig created the Evilive label to distribute his music.

October 26, 2021
DANZIG is one of my favorite bands, I like all of their first 4 albums (which were recorded by the original 4-piece band lineup) from 1988-1994 era (I call this style "rock music with heavy guitars" because it's not "metal" but it's not "hard rock" either) and their 7th album from 2002 (the band recorded and released 10 studio albums with their own songs so far)!

April 27, 2020
Just stop already. I’m a Danzig fan for life but can say he should of stopped after Deth Red Sabaoth
See 4 replies

September 3, 2018
I think first hard rock records were moving from old blues riffs.. rick Rubin loved stuff like this and Glenn had this incredible voice (..gothic Elvis yeah!). It's not a problem to consider Danzig not enough modern, it's clear they come from punk. But music history is full of "hard&bluesy" great bands.
Take a look on The Groundhogs from uk..