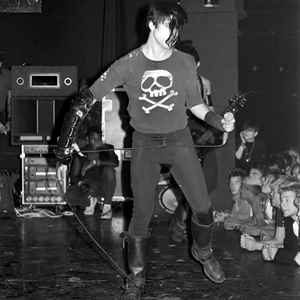 Real Name:
Glenn Allen Anzalone
Profile:
Glenn Danzig was born on June 23, 1955 in Lodi, New Jersey, USA and is an American singer, songwriter and musician who is largely considered to be one of the fathers of the Horrorpunk genre of music.
He is the founder of the Misfits (original lineup 1977-1983), Samhain, and Danzig. He is often associated with the Devilock, a distinctive hairstyle for which he and fellow band members of The Misfits and Samhain were known. He also owns the Evilive record label and Verotik, an adult-oriented comic book publishing company. Glenn previously owned Plan 9 Records from 1978 until 1995, when the label was terminated as part of a legal settlement with Misfits bassist Jerry Only. His musical career spans over forty years, encompassing a range of genres from punk rock, heavy metal and industrial to blues and classical, and his songs have been covered by Metallica, Guns N' Roses, Entombed, and AFI, among others. He has also written songs for long-time idols Johnny Cash and Roy Orbison.
As a singer, he is noted for his powerful and broad vocal range. As an author, he is known for his fascination with horror, gore, occult, adult and religious themes.
His distinctive vocal style, which is reminiscent of Elvis Presley, Jim Morrison and Howlin' Wolf, coupled with his image and lyrical subject matter, have made him a controversial figure throughout his career; earning him the nickname of "Evil Elvis" along the way.
Glenn was also originally considered for the role of Wolverine in the original X-Men movie in 2000 but was replaced by Hugh Jackman due to his touring commitments.
Aliases:
Glenn Anzalone
Variations:
Viewing All | Glenn Danzig
13, Dantzig, Danzig, Danzig G, Danzig Glenn, Danzig, G., Danzing Glenn, Dänzig, G. Danzig, G.D., G.Danzig, GD, Glen Danzig, Glenn Danzie, Glenn Danzing, Grenn Danzigu, Guren Danjigu, Zigdän, ぐれん・だんぢぐ, だんぢぐ, グレん DANじぐ, グレン・ダンジグ, 愚連 断痔具, 愚連断痔具