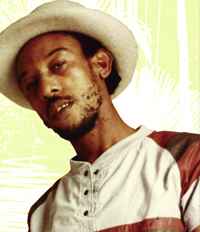 Real Name:
Henry Lawes
Profile:
Henry "Junjo" Lawes was one of the most essential Jamaican reggae/dancehall producers during the 1980s.

Born 1960 in Kingston 11 (Waterhouse), he used to be a JLP gunman before he took up a carreer as a producer and soundsystem operator. Starting out as a assistant producer for Linval Thompson and releasing his first productions on Thompson Sound and Hyman Wright's Jah Life, he soon became independent with his own imprints, Arrival, Jah Guidance and Volcano.

Despite being only semi-literate and having no musical education whatsoever, Lawes possessed an extraordinary talent in songwriting and new talent scouting. He was the one to discover Barrington Levy in 1978, seminal dancehall artists like Eek-A-Mouse, Lee Van Cleef (2), Frankie Paul, Cocoa Tea and Billy Boyo also were Lawes' protégés; yet probably his biggest "project" was Yellowman, enjoying overwhelming stardom in Jamaica and being signed as the first dancehall deejay by an international major in 1984 (leading to a split with Lawes though).

Employing the dry and heavy sound of the Channel One backing band The Roots Radics, Lawes created the typical dancehall sound of the first half of the 1980s, which he managed to market very successfully around the world through a stable cooperation with Greensleeves Records, who released nearly all of his material for the European market. Greensleeves labelhead Chris Cracknell visited Lawes repeatedly in Jamaica, and the two became good friends, tightening the cooperation.

In 1985, Lawes moved to New York, where he got in conflict with the law due to drug issues, and had to spend six years in Ryker's Island prison. Released in 1992, he returned to Jamaica and produced a few number one hits for Cocoa Tea and a bunch of albums for various artists, yet he could not reach his earlier overwhelming success.

December 8, 2014
i think junjo prod alot of tunes , half album , like on the jah life "hyman wright" label he didnt get credit for maybee some jah thomas black solidarity two

November 9, 2012
Does anyone know if Junjo ever went under the credited name of J. Henry? Ive just been adding a few Black Solidarity releases which sound very much like his style with that name credited. I found this :http://www.reggaecollector.com/en/stock/index.php?keyword=J.%20Henry%27s&div=label&search=another which also credits Laws on label though so maybe not?