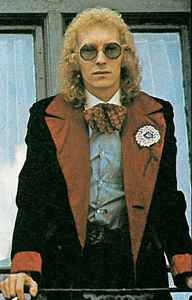 Real Name:
David Henry Trais Terry
Profile:
British guitarist and vocalist. Named himself in honour of the character in the Burt Lancaster movie “Elmer Gantry”. Real name David Terry.
Was a member of the of the bogus Fleetwood Mac band, that the then manager Clifford Davis send on a US tour in 1974 when the real Fleetwood Mac rejected the tour. The tour was stopped after a trial. Gantry later claimed that Mick Fleetwood of the original band was in on the plan to tour with a bogus band, which has been denied by Fleetwood. In 1975 Gantry and other musicians from the bogus band formed Stretch and wrote their hit "Why did you do it" in a direct comment on Mick Fleetwoods denial of taking part in the bogus band tour.
Aliases:
Dave Terry (4)
Variations:
Viewing All | Elmer Gantry
E. Gantry, Elmer, Elmer Gantrey, Emery, Gantry