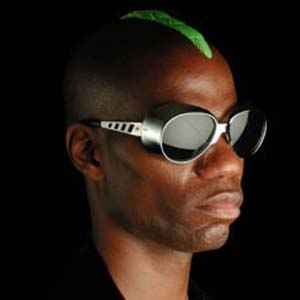 Green Velvet, initially created by house don Cajmere (AKA Curtis Alan Jones) as an outlet for his non-vocal productions and frequent DJ-ing gigs, grew to become even more popular than the man himself, thanks to club singles like "Preacher Man", "Answering Machine", and "The Stalker".

Jones, who had nurtured the Chicago house renaissance of the 1990s with his Cajual Records, gained success in 1993 with the Cajmere single "Brighter Days" (with Dajaé on vocals). Later that year, he formed the sublabel Relief Records, mostly for instrumental tracks by himself and others.

Besides releases from DJ Sneak, Gemini, and Paul Johnson, Green Velvet figured on many of the early Relief singles, including its first, "Preacher Man" as well as "Flash" (also released on the British label Open), "The Stalker", and "Answering Machine" (1997).

January 8, 2021
Curtis Jones is a true OG Chicago underground innovator. His sound is unmistakable, like nobody else.

August 9, 2015
one of the very few people, who are allowed to talk over a techno track. vocals are always perfectly fitting with the atmosphere.

Curtis' music and executive production through Relief and Cajual pretty much defined the 90's midwest rave scene. He is a creative genius. His tracks still destroy dance floors but it's not just his tracks but his _style_ that has deeply influenced international rave culture.

August 5, 2003
Green Velvet has defined his own sound of techno-house. Bizarre, funky sounds and noises with abstract vocals and a pounding house beat are the elements of his tracks. I was fortunate to see his live set in '96, in Cleveland OH. It was the best live set I had ever seen (musically and entertaining). There were two excellent dancers (guy and a girl) that added much to set. I only specifically remember 'Flash' and 'I Want To Leave My Body' as two of the tracks he performed.

June 18, 2003
Green Velvet is a DJ best seen live. He has a great personal presence and he grooves along with the music and knows how to feel out the crowd and decide what to throw down. I'v seen him 3 times, once in Detroit, once in Rochester, NY and once in Lausanne, Switzerland and each time he was just as amazing if not better than the time before. Try as I may I couldnt stop moving the entire time he played. He is a must if you like funky-tech house-Detroit style.
See 1 reply