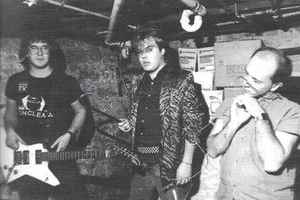 Profile:
Couch Flambeau is an American punk rock band, formed in 1981 in Milwaukee, Wisconsin. The band is known for the biting wit of their lyrics. They have released four full length albums: Mammal Insect Marriage (1983) (on Ludwig Van Ear Records), The Day the Music Died (1985) and Ghostride (1989) (both on It's Only a Record Records), and a self-titled CD (1998). They have also released two tapes, Curiosity Rocks (as Couch Potatoes in 1982 - allegedly recorded in only 6 hours) and Rock With Your Sock On (1987), as well as an EP, Models (1987), and, finally, a 37 song career overview entitled I Did a Power Slide in the Taco Stand: Anthology 1982-2001 was released in 2004.
Couch Flambeau was formed by two Greendale, WI High School friends, guitarist Jay Tiller and drummer Ron Faiola (aka Ron Ford/Giant Wow) in 1980. Their first shows were in the fall of 1981 at the University of Wisconsin Milwaukee's dormitories under the name Couch Potatoes. For these shows, Tiller and Faiola would wear pyjamas and paper bags over their heads while playing early versions of songs that ended up on the first Couch Potatoes release, Curiosity Rocks.
Sites:
Bandcamp, Facebook
Aliases:
Couch Potatoes (4)
Members:
Jay Tiller, Neil Socol, Ron Ford (4), Rusty (7), Rusty Olson