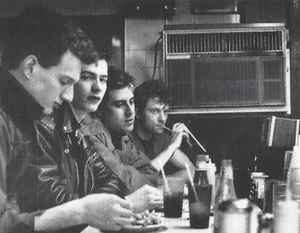 Profile:
Naked Raygun is a popular punk rock band from Chicago, IL. Early in their career, the band was a very arty punk band, but as time passed and band members changed, the group became a more streamlined power pop/punk act. The group was founded in 1980 by guitarist Santiago Durango and bassist Marko Pezzati, although both would leave the band early on. Jeff Pezzati, Marko's younger brother, was soon recruited to sing and would be the only member to remain with the band throughout their entire history. The band made their recorded debut on the "Busted At Oz" compilation in 1981. 1985's "All Rise" (the group's 2nd LP) would be the first Naked Raygun record to feature what many consider the group's "classic" line up of Jeff Pezzati, John Haggerty (guitar), Pierre Kezdy (bass), and Eric Spicer (drums). The group was now among the most popular bands in Chicago and had a dedicated following around the country. In 1989, Haggerty, frustrated over the band's lack of consistent touring, quit the group. Many felt this was a fatal blow to the band's chemistry. Haggerty was replaced by Bill Stephens for 1990's "Raygun...Naked Raygun". The band continued on until 1992. Although no formal break up announcement was made, the group essentially disbanded. In the ensuing years, the band would play sporadic reunion gigs in Chicago (with Bill Stephens in place of John Haggerty, who refused to participate). In 2006, the band announced that they were reforming and have since played shows across the country. In 2011, Pierre Kezdy was sidelined by a stroke and the band was assisted for live shows first by Pete Mittler and later Fritz Doreza. In 2020, Kezdy passed away after a battle with cancer.