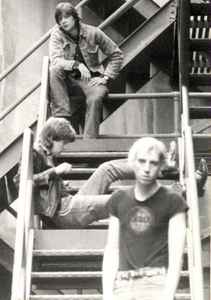 Hands down one of the greatest bands ever. Their first four albums are some of the best records ever made. I love the Wipers.

December 25, 2019
Wipers played in Athens Greece in front of a crowd of almost 2.000 at CLUB 22 on late April or May 1987. This gig is considered historical among fans of punk/post punk/new wave.
All mid-80's ('83-'88) Wipers records were released in Greece through Virgin Records GR and can still be found here at record stores or vinyl bazaars (originals and re-issues).
Greg Sage was -and still is- a cult hero and has also played solo in full clubs in Athens after Wipers .
Greek music magazines reviewed their records as early as 1982-1983.
In the annual reviews for years 1981(!!)-1982-1983 issued by the most popular Greek music magazine (selling 25-30.000 copies monthly at the time), Wipers were voted by the readers among the top 10 bands/artists in the "Hope for the Future" category.
See 1 reply

Fantastic band and Gregs guitar.sound and the way he plays is his own. I also think the bio is mislead, I´m from south Sweden and I discovered Wipers in -83, I also had friends in Denmark & Germany who were huge fans. They toured middle Europe in the 80s. I was in a bar in Berlin in -89 where they only played Wipers and Greg Sage songs!! I really hope it´s still there. I had the pleasure of promoting a gig -91 with them and that concert was one the finest live-moments I`ve experienced. My,my ,,what a band....

November 20, 2016
Very good band. Youth Of America remains their masterpiece in my eyes. SAGE is one of the unsung guitar heroes of all time. What a player! (And quite a good singer, too).

September 30, 2016
I'm with you Harspistolen. The Wipers and Greg Sage, for that matter, were quite well known by people who listened to punk and hardcore even in the U.S. This bio is not accurate.

December 9, 2015
Not so sure about that bio. If they weren't known outside of their hometown until Nirvana covered them,why are there UK and German pressings from as early as 84?
See 5 replies