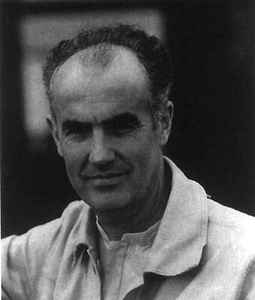 Luigi Nono was an Italian avant-garde composer of classical music and remains one of the most prominent composers of the 20th century.
He studied with Gian Francesco Malipiero at the Venice Conservatory (1941-5) and with Bruno Maderna and Hermann Scherchen, both of whom orientated him towards 12-note serialism (he married Arnold Schoenberg's daughter Nuria in 1955). His avant-garde partisanship was inseparable from a commitment to socialism, twin aspects of a revolt against bourgeois culture: hence his avoidance of normal concert genres in favour of opera and electronic music, his frequent recourse to political texts and his work in bringing music to factories. His works include the operas Intolleranza 1960 (1961) and Al gran sole carico d'amore (1975), the cantata Il canto sospeso (1956), orchestral works and tape pieces. Much of his music of the 1950's and 1960's has a fervent lyricism; later works tended to be more pessimistic (Ein Gespenst geht um in der Welt, 1971).
Sites:
luiginono.it, Wikipedia, treccani.it, theguardian.com
Variations:
Viewing All | Luigi Nono
L. Nono, Nono