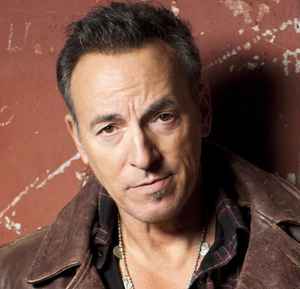 Nicknamed "The Boss", Springsteen is an American singer-songwriter and rock musician, widely known for his brand of poetic lyrics, his Jersey Shore roots, his distinctive voice, and his lengthy and energetic stage performances. He released his first album in 1973. The backing group that played for him is called The E-Street Band. Inducted into Rock And Roll Hall of Fame (Performer) and Songwriters Hall of Fame in 1999.

January 8, 2021
To me the music of Bruce Springsteen is very important, because it was the first real musical experience i have ever had as a Teenager in the 1980s. There are two artists i started with. Dire Straits with Mark Knopfler AND Boss Bruce Springsteen. First heard and realized in 1987 with the underrated album Tunnel of love. Wow, what a special rock-sound, i thaught in those days. So i was "brucified" . I spent all my pocketmoney to buy his other regular Vinyls, CD-Albums, Singles, Maxi-Singles, CD-Singles and so on. In a very short time i have listened to all records i could get in those days. It´s very fascinating to feel his power, loyalities with his bandmates, because his music and sound carries those emotions and feelings to the listener. First live experience with The Boss and me was during Tunnel of Love Tour 1988 in Germany. Live-Power at it´s best.

March 23, 2020
My 1st song Bruce song was Rosalita, I simply fell in love. Imagine sitting there hearing it for the first time in Australia '73, it was miraculous, totally different from anything else. It took a lot of work trying to get the album, but I did it! Then waited like a dog for Born To Run, it was released here, I still consider it the most perfect album ever produced by anybody Ever!!!! Then came Darkness, the River & then Nebraska. There's been moments since. But those first & yes that does include Greetings, I didn't forget, they are so superb, right now as I write this I'm listening to Jungleland, my 2nd favorite & I still believe the sax solo is exactly what love sounds like, it's a whole love story in a sax solo (we miss you Big Man💖). I still have all my original copies, the only one on c.d is Greetings, and yes they are all perfect except the River, ( don't worry the person who did it didn't suffer too much pain, but they will never find him, don't scratch my Springsteen). So I have been listening since '73 & I will listen to him forever, but but the first 6 are best. 🤘
See 1 reply

September 3, 2018
I grew up in New Jersey. I remember the days when I thought this very tallented musician was going to be poor and unknown the rest of his life. Then he came up with this miracle album Born To Run. All of a sudden WPLJ and WNEW were playing his songs over and over, he was on the cover of Time and Newsweek, and he was being called the future of rock and roll. I moved out to California to go to school, and waited for his next record to come out. It took almost 3 years! Finally Darkness came out and he came in July 1978 to play the Forum; my brother and I went. He still wasn't that popular or well known. It was only when Born In the USA came out and he was Dancing In the Dark with that chick on MTV did he make it big. I was really happy for him that he finally cashed in. Personally, I like the old Springsteen better, but that's Ok. I am happy for him and he is a true rock and roll hero.
See 1 reply

February 13, 2018
For me Bruce is the best Performer ever.
Passion, devotion, true heart.
See 1 reply

December 23, 2016
No rock performer has spoken with more authority on the human fallout of the American Dream than Bruce Springsteen. Darkness on the Edge of Town and Nebraska are American Gothics haunted by star-crossed lovers and noble souls hag-ridden by fate into crime, depression, and worst of all, ordinariness. But lest we forget, the original denim rocker has also written some of the most uplifting songs in AOR: every line of "Born to Run" and "Glory Days" offers an ideal place to hang your troubles out to dry. Springsteen plays the perfect tailor for the damaged lives that populate his lyrics, recognizing the tiny flaws and the holes that gape in the human fabric, and doing his best to mend them -- sometimes with simple compassion, sometimes with joy. Just about everything the Boss has done has an air of permanence about it. You just know that when generations hence try to grasp what life meant to us, his music will offer an important clue. But despite his many accomplishments and incredible fame, something has kept the Boss down to earth. He generously handed out hit songs to Patti Smith and Robert Gordon in the 1970s, and even today continues to promote the careers of lesser luminaries such as duet partner Elliot Murphy.
See 4 replies

November 25, 2008
Also known for his famous nickname the boss, is an american songwriter, singer and guitarist. He has recorded and toured with the e street band. Springsteen is widely known for his brand of heartland rock infused with pop hooks, poetic lyrics, and Americana sentiments centered around his native New Jersey.

Springsteen's recordings have tended to alternate between commercially accessible rock albums and somber folk-oriented works. Much of his status stems from the concerts and marathon shows in which he and the e street band present intense ballads, rousing anthems, and party rock and roll songs, amongst which he intersperses long, whimsical or deeply emotional stories.