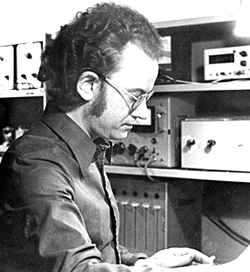 Profile:
Ton Bruynèl (January 26, 1934, Utrecht, The Netherlands - May 5, 1998, Mailly, France) was a composer who studied piano with Wolfgang Wijdeveld at Utrecht's conservatory of music (1952-1956) before establishing his own studio in 1957 in Utrecht - the first private studio of the country - focused on music which combines electronic and acoustic sounds. During the seventies and eighties, he taught electronic composition at Utrecht's conservatory.
Sites:
tonbruynel.nl
Variations:
Viewing All | Ton Bruynèl
Ton Bruynel