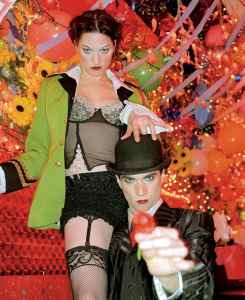 Profile:
The duo of The Dresden Dolls make music based around arrangements of drums (by Brian), piano and vocals (by Amanda), which they call their style of music "Brechtian Punk Cabaret". They started in mid-2000 in Boston, Massachusetts, releasing a compilation of live tracks, then their self-titled debut album. In spring 2005, they got set up as the opening band for Nine Inch Nails, even without Trent Reznor attending any of their live shows beforehand.

As of September 2008 the band are on an indefinate hiatus while Amanda works on her solo career and Brian plays with other bands.

-- - -- - -- - --
Notes on the band: Dresden Dolls are dolls made from a delicate porcelain from the German city of Dresden; then there's Dresden's history of being firebombed at the end of World War II in 1945.