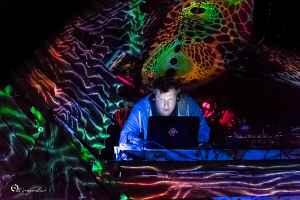 Born in London, Mark Day was surrounded by music growing up, either playing on the radio which was always on or listening to the soundtracks of video games. During his teenage years he discovered a whole new world of electronic music, starting with trance and delving into many of the subgenres; he was in love. After some years of searching the internet he came across the term 'psychedelic music' - the name intergued him so he decided to dig deeper which culminated in him finding an underground psytrance party in London by luck in late 2007. After a year of going to parties he started to DJ at them and a couple more years later he started to produce his own music. His psytrance music can be characterised by having a lot of sounds with layers of atmospheres over the top, always driving and with some psychedelic wizardry inside. Having been lucky enough to have played his music around the world and continuing to do so, he is currently working on his debut album which will be released 'at the right moment', He is also a listener, collector and occasional producer of downtempo music and has done various mixes throughout the years which have been mainly distributed to close friends.
Sites:
Facebook, SoundCloud, Bandcamp
In Groups:
Jötunn