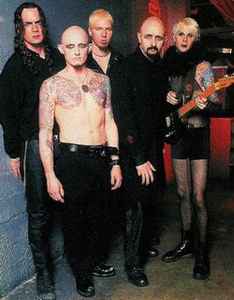 Profile:
After the break-up of his previous band Fight, Rob Halford began work on a new musical project with John Lowery (aka John 5 of Marilyn Manson fame), titled "Gimp". They would record an album's worth of demos together. While attending Mardi Gras in New Orleans, Halford would meet Trent Reznor. He gave Reznor a copy of the demos, and in turn, Reznor ended up coming in as producer and releasing it under his Nothing label. Upon discovering another band was already using the name "Gimp", the project was redubbed "2wo". After a headlining tour, the live band all parted ways and Lowery left to join Manson. Rob Halford initially started demos for a follow-up album, but eventually called the project quits. He used the rough material he'd recorded for his next project, simply titled "Halford" - a return to the metal genre he was famous for.
Sites:
Facebook, Wikipedia
Members:
James Wooley, John Lowery, Ray Riendeau, Rob Halford, Sid Riggs