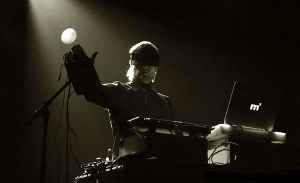 Beginning in late 1999 with 14id1610s, the m² project took shape as a way for Mootz to explore sound realms outside the intensely structured ferocity of Panacea's breaks-based madness, to work with sound as texture and layer in a contemporary fashion and Ant-Zen was the perfect means. "I had only one release on the label at that time and not much to do with the industrial-scene," explains Mootz, "So Stefan Alt (owner of Ant-Zen) sent me all the releases he did and out of that I made my first m² release... he also came up with the name, so I owe him something!"

Yet the m² albums that followed on Mille Plateaux (Sinecore, 2000), Ant-Zen (Kopyright Liberation, 2000), and Hands Productions (Parsec, 2001 and The Bitter End, 2002) instead saw Mootz exploring the worlds of microsound and glitch through the implementation of various sample sources ranging from The KLF to spoken word from Lord Of The Rings adaptations to electrically-excited transistors and diodes the size of a few hundred nanometers (laptop, clicks & cuts, etc). But the aesthetic of m² remained one of the minimalism more often found in sound experimentalists like Carsten Nicolai and Raster-Noton, Taylor Deupree and 12k, and Goem - where the value of a sound, be it sampled or traditionally generated, came from its aural texture.

With War Of Sound (Ant-Zen, 2003), Mootz changed his direction from microtonal click 'n cut-oriented soundscapes to rhythm-oriented ambient music. This new approach was enjoyable at home and in concert. Mootz's performances as Panacea might be a reason for this change - he explains: "The music of m² should become more rhythmic to get better, interesting live shows for the crowd. In my opinion, pure ambient music presented live is too one-dimensional". Aswad (Ant-Zen, 2004) is similar to War Of Sound in that both albums follow the same path. On Aswad, however, Arabic influences have taken over the sound, track titles and artwork. Of course there is inevitably one name mentioned when an artist utilizes these themes: Bryn Jones, a.k.a. Muslimgauze. Aswad's title track is reminiscent of Jones' work, but the typical m²-clicks and the pounding beats make this track unique and original.

The Frozen Spark (Ant-Zen, 2005) surprised those who thought m²'s musical direction would be calculable. Mathis Mootz's next masterpiece tears you down - deep down. Once there were nearly danceable rhythms, mid-eastern influences, and brightness; now there is a maelstrom of reverberation, tormented voices, ultra-slow beats and haunting sound manipulation - sheer darkness. A dark, brooding ambient in the vein of pioneers such as Lustmord.

Following the fantasy influenced War Of Sound, the exotic Aswad and the haunting The Frozen Spark, Mathis Mootz produced his latest concept work, Nyx (Ant-Zen, 2006). Nyx (which means night) represent the dark regions of greek mythology - self-evidently Nyx is the aural implementation of what these figures stand for. The deep drones, bass pulses and disturbing soundscapes seem to originate from some otherworldly region and worm their way through the listener's psyche (and into nightmares).
Members:
Mathis Mootz, Problem Child
Variations:
Viewing All | m²
Squaremeter, m2