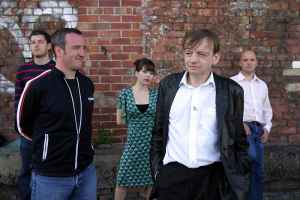 Mark E. Smith was the lead singer, lyricist, frontman and only constant member of the formation. He died on the morning of Wednesday January 24th, 2018.

Formed in 1976 through a poetry-style collective beginnings, The Fall released around 50 singles, 34 studio albums, and well over 50 live and compilation albums as well as releasing a play 'Hey Luciani' and a Ballet 'I am Kurious Oranj'. They also recorded 24 sessions for John Peel's Radio 1 show between June 1978 and August 2004.

April 11, 2022
All you accolytes, worshippers, believers of the proletarian subsersive power of The Fall's music, i'm with you//
Reply Notify me 4 Helpful

March 17, 2022
Really need to stop pumping the archives for more live releases. Just concentrate on getting good remastered copies of the real albums. Someone must be making a buck off this sacrilege watered down trip. It really continues to strip away at one of the most jaw dropping catalog of normal releases. Too many people have been draining this guy for too long. It’s a shame because he’s one of the all time greats.
Reply  See 3 replies Notify me 4 Helpful

March 15, 2022
Changed my life for the better. Read EXCAVATE!
Great book about the Fall.
Reply  See 2 replies Notify me 1 Helpful

May 14, 2021
The greatest band ever to have stalked this miserable world.
Reply  See 4 replies Notify me 19 Helpful

The Fall embrace the beginning-end-and-beyond... of "indie rock" in its onthological fundamental sense, with the "beyond" being explored/developed by Mark E Smith through 42 years with different sound/style permutations, a consistent discography from beginning to end unmatched by any artist. Simply the best artist ever.

April 20, 2018
Unsung legend gone ,look at the music left behind, a bit it & miss- but when it hit , lyrics un parrelleld ! Lifted average musicians , imperfection can be better than perfection , he new this , you can feel this in the music . Will never be anyone like this again , 40 odd years with edge . & compliments to all who performed .

April 6, 2018
What a massive loss, saw The Fall so many times & as has been said every Gig was a highlight, you also had to expect the unexpected, playing with the Muso's amps, singing behind doors, going off pissed & coming back on straight and playing a blinder, the Man was an absolute legend, totally gutted i'll never see them Live again, just hope there's a lot of Material hidden away in the Vaults somewhere?
Reply  See 1 reply Notify me 3 Helpful

Does anyone know if Imperial Wax Solvent is out of print?
Reply  See 3 replies Notify me Helpful

February 18, 2018
Thats very sad. Thanks Mark for your excellent Music. See The Fall many times Live. Every Concert was a Highlight for me. R.I.P. Mark
Reply Notify me 1 Helpful