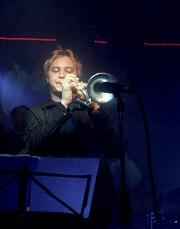 Jukka Eskola is a young trumpetist who is involved in various jazz groups, but perhaps he is best known outside Finland from his work in the Finnish dancefloor/hard-bop jazz quintet, The Five Corners Quintet. Eskola is about to release his debut album, ”Jukka Eskola” (Free Agent Records) in the spring of 2005 and Ricky-Tick Records is proud to release the first single taken from it.

Eskola felt that the time was right for his solo album because he has played as a sideman in several bands (NuSpirit Helsinki, Teddy Rok 7, Quintessence, Jimi Tenor Group etc.) and recordings, and now he wanted to do something of his own. The tracks are straight ahead jazz with a club feel. By playing ”club jazz” Eskola feels that you can reach a new audience, not only the traditional jazz fans, even though his groups formation is old school, the solos improvised and the tracks recorded live in the best jazz tradition.

Eskola’s quintets musicians are the cream of the Finnish jazz scene, all awarded young men except Jukkis Uotila (on piano) who has been around a bit longer. He has performed as a leader of his own small groups that have included such sidemen as Randy Brecker, Bob Mintzer, Mike Stern, Bob Berg, Wayne Krantz, and has played with such jazz giants as Toots Thielemans, Randy Brecker/Eliane Elias, Joe Henderson, McCoy Tyner, Benny Goodman, Chet Baker, Freddie Hubbard, Jack McDuff, Gil Evans and John Scofield to name a few. Timo Lassy plays tenor sax in U-Street All Stars, Antti Lötjönen is the bassist for The Five Corners Quintet and Ilmiliekki and the producer/drummer Teppo Mäkynen plays in Teddy Rok 7, The Five Corners Quintet, NuSpirit Helsinki and various other jazz groups.