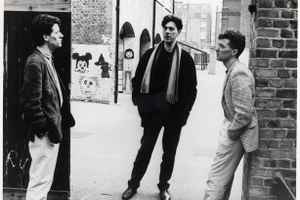 Profile:
The Scottish band The Blue Nile has enjoyed a mystique contrived by its inaccessibility and the infrequency of its recordings, but it has also made a series of critically acclaimed discs. The group was formed by three Glasgow natives who had graduated from university there: singer/songwriter/guitarist Paul Buchanan, bassist Robert Bell, and keyboardist Paul Joseph Moore. (Engineer Callum Malcolm and drummer Nigel Thomas have worked with the trio consistently, to the point of being considered secondary bandmembers.)
The Blue Nile is the title of Alan Moorehead's 1962 sequel to The White Nile, the two books making up a history of the Nile River. They recorded their own single, "I Love This Life," which was distributed by Robert Stigwood's RSO Records just before the company closed its doors. They were then signed by Linn Products, which released their debut album, A Walk Across the Rooftops, in 1984.
Sites:
thebluenile.org, Facebook, Wikipedia, YouTube
Members:
Paul Buchanan, Paul Joseph Moore, Robert Bell
Variations:
Viewing All | The Blue Nile
Blue Nile

March 18, 2018
I'm desperate for these albums to be reissued... anyone any idea if anything is in the pipeline.
Reply  See 2 replies Notify me 1 Helpful

September 24, 2003
Peace At Last is the more "electronic" of their albums. They use drum machines etc but the music is firmly in alt folk territory.
Reply  See 2 replies Notify me Helpful