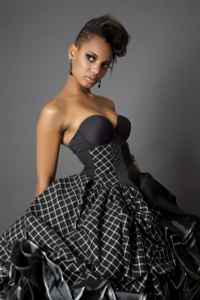 She grew up in Gothenburg and debuted as a reggae artist in 2008.

She began studying economics after high school, but dropped out to focus on music, inspired among other things by a visit to Jamaica in 2008. She has subsequently studied music at The Music College in Angered and at the College of Music at the University of Gothenburg and started driving behind various reggae groups in Gothenburg.

Etzia was one of the leading figures in the music network Femtastic, which works to make women visible in hip-hop and urban music culture.

The stage name Etzia is a name that her mother thought of giving her as a baptismal name after a childhood crush on her mother. Instead, she was named Erica after her father named Erik.

In Melodifestivalen 2017, Etzia participated in the second part of the competition, in Malmö, with the song "Up" written by, among others, Hanif Sabzevari. The entry came in sixth place and did not go further.
Sites:
Facebook, Wikipedia
Aliases:
Erica Haylett