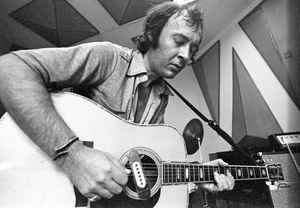 An influential jazz guitarist, famous for mixing jazz, pop-rock, and his native Hungarian music. Inspired by jazz music heard on Voice Of America radio broadcasts, Szabó began playing guitar at the age of 14.

Escaping Hungary in 1956 and moving to the US where he attended the Berkeley School Of Music in Boston. In 1958, he was also invited to perform at the Newport Jazz Festival. Szabó then went on to perform with the quintet of southern California drummer Chico Hamilton from 1961 to 1965.

Beginning in 1966, he recorded a well-received span of albums under his own name on the Impulse! label. In the late 1960s he co-founded the short-lived Skye Records label along with Cal Tjader and Gary McFarland. Later he signed with Blue Thumb Records and CTI Records.