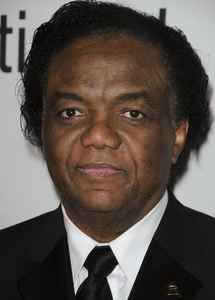 Leroy Burgess: "LAMONT DOZIER: A bonafide, genuine LEGEND has been called Home by our MOST HIGH FATHER GOD/ALLAH. With Eddie and Brian Holland, their composition/production became a template for Black Soul Music in the 1960s. There really are just too many songs to mention.
For a significant period, they WERE the Motown Sound. The Supremes, Four Tops, Martha & The Vandellas, the Temptations and the Isley Bros. were just some of the iconic artists who graced our lives by realizing this trio's compositions. Again, too many to name. You couldn't pick up a Motown product.. without seeing their names. I wanted to be like them.
And thus, another Angel joins the musical ranks of GOD'S Infinite Kingdom... leaving we who remain on the planet with eons of inspiration and positivity. My deepest, most heartfelt condolences to the Dozier and Holland families, to Berry Gordy, Smokey, Diana and the entire family of Motown.. and to every ear and heart Lamont's incredible body of work has touched.. or may be touched in the future."

Marc Mac: "In the words of Lamont Dozier himself “True Love Is Bittersweet”. His love with music sure was bittersweet, the long dispute with Motown that shadowed a significant part of his career and not being fully rewarded in fame or financially; Mix that bitter taste with the sweetness of success and joy those songs generated for so many and you get the story in one word “Bittersweet”. I guess his track “fish ain’t biting” tell us where his head was at that time.
One of his biggest hits was “Freda Payne’s Band Of Gold”(uncredited at the time due to the legal battle he was fighting) a song I heard about 1000 times as a kid, my mother would have that on repeat. And funny enough there’s that sadness behind the uptempo groove like so many Holland -Dozier- Holland hits. The bittersweet tale of memories left after a failed relationship is the root of the lyric “that night on our honeymoon, we stayed in separate rooms”… powerful. “Standing In The Shadow Of Love”, “Where Did Our Love Go” “Why Can’t we Be Lovers” all bittersweet masterclass lyric writing. The later prob my fave of all, I first heard Paul Weller mention that song in a chart he did for a pop mag when I was about 12 years old, then I heard the late Peter Young play it on the Soul Cellar. I would religiously listen to Peter on a Friday night when I was heavily into Northern Soul and remember hearing “Why Can’t We Be Lovers” and thinking I’ve never heard anything like it, it was miles away from the usual Northern Soul sound on the show and stayed with me ever since, its the reason I love to add acoustic guitars in my own productions. That sound lead me on to Honeycone, Chairmen Of The Board and his associated labels Hot Wax & Invictus. His story is immense and this is a tiny fraction of what I know.
Man, we’re running out of greats.
Rest In Peace Lamont Dozier."

Kirk Degiorgio: "RIP Lamont Dozier. One of the best songwriters to have ever lived."

Greg Wilson: "Just heard the sad news that one of the true Soul greats, Lamont Dozier, has passed. Even if you don’t know who he was, you’ll have heard his music, its unavoidable – it’s out there in the ether via the glorious array of Motown classics he co-wrote/produced with brothers Brian & Eddie Holland back in the ‘60s, music that will always live on.
Here are some words I wrote about him in my Discotheque Archives book re his 1977 solo recording, ‘Going Back To My Roots’.
Lamont Dozier made his mark on the ‘60s as one third of Motown’s legendary Holland-Dozier-Holland songwriting/production team, scoring a sackful of hits for the company, including some of the decade’s most memorable 45s by artists including The Supremes, Four Tops, Marvin Gaye and Martha & The Vandellas, to name but a few.
Following a dispute with Motown head, Berry Gordy, they left the company and set up their own labels, Invictus and Hot Wax, in '69, continuing their run of hits with tracks like Chairman Of The Board's 'Give Me Just A Little More Time' and 'Band Of Gold' by Freda Payne.
Having spent a decade recording as a duo with Brian Holland, Dozier struck out as a solo artist in 1973. His most famous song, 1977s 'Going Back To My Roots', was inspired by Alex Haley's Pulitzer Prize winning novel 'Roots: The Saga Of An American Family', first published in 1976, which, the following year, was adapted for TV, becoming a seminal mini-series. Presented as a history of Haley's family, dating back to Africa and the capture of his ancestor, Kunta Kinte, by slave traders in Gambia, it was a TV landmark. One of the most viewed programmes in US history, ‘Roots’ was perfectly attuned to the times, with black Americans, having come through the trials and tribulations of the civil rights era, feeling a greater sense of connectedness to their African heritage.
'Going Back To My Roots' would pick up DJ plays on both sides of the Atlantic, the full-length version perfectly suited to the then relatively new 12” format, the record becoming a firm favourite with UK black music specialists as well with DJs throughout the US.
In 1980, a cover version by Richie Havens would go massive on the British jazz-funk scene (although it's often mistakenly described as a Balearic 'discovery' from later in the decade). In 1981 WEA in the UK actually pressed up a limited DJ-only 12”, featuring both the Richie Havens and Lamont Dozier recordings. However, it's Odyssey's version, from 1981, that gave the song its most mainstream exposure, reaching number four on the UK chart.
In 1989 Italy's FPI Project would score big on the growing rave scene with their interpretation of the track, 'Rich In Paradise', and, following the addition of Sharon Dee Clarke's vocal, it was issued in the UK under the original title, making it to number 9 on the chart."

Rochelle Fleming: "Hello my loves! I just wanted to come on today to express my condolences to the family, friends and fans of the late Lamont Dozier and Olivia Newton-John. Two amazing talents that will be missed terribly. There are some people you think will be around forever. May the both of them rest in peace.
Remember to let someone know love them since we aren't promised tomorrow. "

Gilles Peterson: "Total Legend on so many levels…. I grew up listening to these albums…
‘Why can’t we be lovers’ ‘Going back to my Roots’ ‘Love me to the Max’ … play loud… RIP"