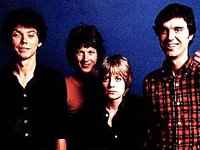 Inducted into Rock And Roll Hall of Fame in 2002 (Performer).

January 13, 2017
Art School and Punk Rock truly came head to head when the Talking Heads formed in 1974. Although they sported neither spiked hair nor pinned shirts, they perfectly embodied the disembodied, and their stuttering vocals, choppy rhythms and detached lyrics fit right in at CBGB's. This phase wouldn't last long, however, as David Byrne's smartly subversive songwriting was bound to find an audience bigger than New York's punk rock elite. With Fear Of Music (1979), the band began to radiate a kind of somber power, as they beefed up their previously lean sound with African rhythms. Remain In Light followed in 1980, and remains one of the more striking albums of that decade or any other. The rhythms were meticulous and yet completely driving, while the production was highly experimental with enough conventional flourishes to make "Once In A Lifetime" a radio success. Their blueprint now set, the group became hugely successful over the course of the 1980s, and their 1984 concert film is widely considered one of the best ever made.
Their music was so immediate that their worldbeat-inspired songs still sound unique in whatever context they're heard. The group gave official notice that it was disbanding in 1991, bringing an inevitable close to one of the most creative and experimental commercially successful acts of the rock 'n' roll era.
Reply Notify me 2 Helpful

Awesome band that defied the boundaries of Rock music. They fused so much funk into their music that they cannot be considered simply a Rock band. David Byrne is a maverick and a real champion of World music and exploring influences from around the world. This is reflected in their music. They have done so many quality albums from 'Fear of Music', 'Remain in Light', 'Speaking in Tongues' etc, countless memorable singles like 'Once in a Lifetime', 'Slippery People', 'This Must Be The Place (Naive Melody)', 'Blind', 'Lifetime Piling Up', 'Psycho Killer', 'Burning Down the House'.... The list goes on and on. A really innovative rock group that you can dance to - they were always played in all the cool pre-house dance clubs in New York. The funkiest Rock band ever - hell they were so funky you would think they were black!