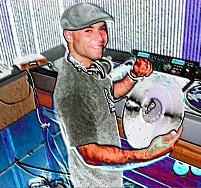 Real Name:
Rafael Rodriguez
Profile:
Inspired by his family and the surroundings of Chicago's Latino community of Logan Square, Rafael Rodriguez aka Lego, committed himself to music at an early age. His career began when he was 19 years old with his first residency at Kaboom!. Kaboom! led to his 8-year (and still going strong) residency at Red Dog’s "Boom Boom Room", one of the longest running nights in Chicago club history.

In '95, Lego to completed a remix for a Donna Blakely song which made it to #1 on the International dance Music Charts. Since then he has claimed three Billboard hits remixing Ralphie Rosario/Donna Blakely collaboration, "Take Me Up" and "Do You Like The Way That It Feels" and Rosario's 1998 romp, "Wanna Give It Up" featuring Disco legend Linda Clifford. In 1999 he produced the E.P "Flava In Ya Ear" on Afterhours which included international hits "El Ritmo De Verdad" and "When I'm With You." Both tracks quickly became anthems for that year's club season in Ibiza. The EP hit #1 on the International Dance Music Charts and still remains the best selling release in the label's history.