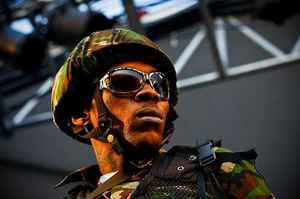 Growing up in Portmore, he would practice with neighborhood sound systems Soul Signal and Electric Force, and in 1993, Adijah, now in his late teens, recorded his first single "Love Fat Woman" for Alvin Reid's One Heart Label under the name Adi Banton, a name he chose in tribute to Buju Banton who was one of his role models.

He recorded several more tracks for local producers until 1996 when he and two friends, Mr. Lee and a singer called Escobar, decided to form a group. After watching a movie about Pablo Escobar and his infamous cartel, Adijah came up with a name for his trio: Vibes Cartel. Unfortunately some time after, the group broke up due to internal frictions leaving Adijah again to continue alone. Adijah choose to keep the name of the group changing the C to K in Kartel and adopting the moniker Vybz Kartel.

In 1998, after performing at the Champions In Action stage show in his hometown of Portmore, Vybz linked up with Bounty Killer. His new role as Killer’s protégé attracted attention from the public, and he progressed to collaborations with Bounty Killer such as "Gal Clown" and "Girls Like Mine (Liquid Riddim)". He then released on his own early hits such as "Gun Clown, Guns Like Mine (Trafalga Riddim), Badman (Panty Raid Riddim), Bus Mi Gun Like Nuttn, Most High (Mexican Riddim) and War Organizer (Clappas Riddim)". He also had a string of collaborations with Wayne Marshall, such as "New Millennium (Mad Antz Riddim), Why (Krazy Riddim) and Why Again (Good To Go Riddim)". This debut led to Vybz Kartel being crowned Deejay Of The Year at Stone Love’s 30th Anniversary, 2002.

Kartel has already had several collaborations with international hip-hop and pop stars. In terms of singles sold, he has had the second-best year on the reggae charts for 2003 (outsold only by Elephant Man) and has released 2 albums for UK/US based label Greensleeves Records.